Is Lisbon at the mercy of real estate speculation?

In recent times we have read and heard comments that criticize the real estate panorama in Lisbon, and to a lesser extent also in Porto, stating that this one is distorted by speculation and that we live a moment of 'real estate bubble' in what concerns the residential market . 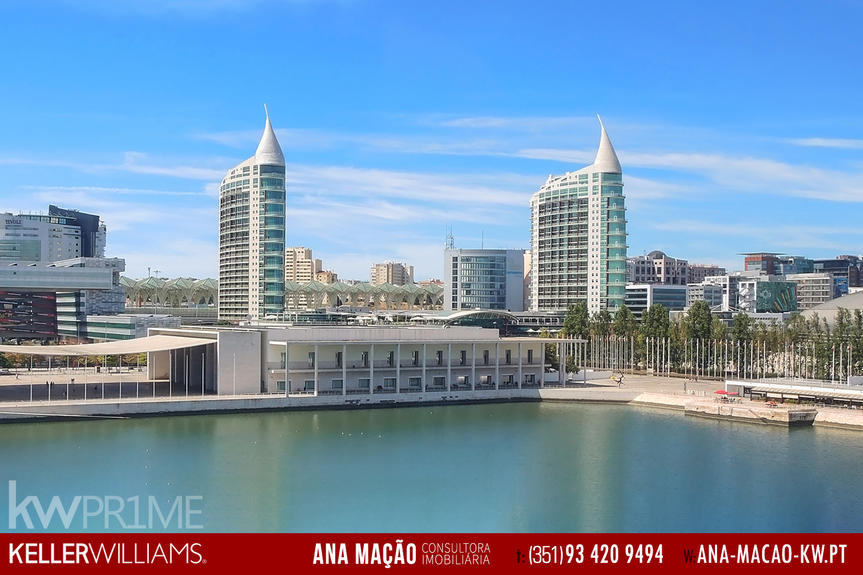 That the sale prices of the houses (per square meter) have shown an upward curve never seen before, for such a long time, seems obvious. But some more refined reflection on this subject is required, rather than the simple realization that prices are climbing, year after year.

For many years, the real estate market for buying and selling real estate in Lisbon has been divided by the specific characteristics of the domestic market: a high dependence on home buyers by the domestic buyer; low purchasing power (GDP per capita € 22,398 versus € 29,017 in EU-2016); high rate of fiscal effort of families; high ratio between the amount of the loan and the value of the property given as collateral (between 80% and 90%); weak household saving capacity (5.8% versus 12.1% in the Euro-Zone 2016), etc. etc.

In addition to this state of affairs, the economic crisis that hit 2008 and a stagnant rental market, contributed to the sinking of the real estate industry in Portugal, while real estate was losing value.

From 2015, the dynamics of the real estate market in Lisbon changed and the rates of growth, in number and value, of real estate transactions began a cycle of growth reaching successive records.The causes are many: the exponential growth of tourism which, in addition to boosting consumption, attracted new investors and residents of different nationalities; the appearance of tax counterparts for foreigners ( Visa Gold and Non-Resident Resident Statute ); tax incentives for the rehabilitation of degraded real estate within the ARU (Areas of Urban Rehabilitation); the attraction of foreign residents through the " good publicity " and international media publicity made during the years of the city of Lisbon; the good momentum of the Portuguese and world economy , the increase in demand in the main urban areas (by job search and because this has been the standard registered all over the world), etc. etc.

And, as we all know, in a liberalized real estate market is the law of supply and demand that forms the selling prices . More demand and limited supply have an obvious consequence: increase in price / m2 of real estate. Apart from the social and demographic issues affecting Portuguese buyers, several other questions arise: Will we continue to witness this price escalation in the coming years? Is this growth putting at risk the real estate market in Lisbon increasing the risk of a "bubble phenomenon"? Is it a unique phenomenon?

AND WHEN DO WE COMPARE WITH THE REST OF EUROPE?

There is nothing like looking at the available statistical data to establish a correlation between the sales figures in the national real estate market and what is happening in the rest of Europe. But I will do so only for the urban areas where the highest price growth has been felt: the prime historical zones of the center of the cities . And since it is in these areas that prices across Europe reach higher values, I will try to compare and correlate real estate with the production of wealth in each country. The use of wealth indicators is justified as a barometer and at the same time as a counterweight in order to be able to assess whether this growth dynamic is in line with that of other countries and what the future prospects are, since demand in these areas tends to be filled by entities and inhabitants of other areas (tourism, senior management, companies, etc.).)

To that end I have used the most recent data available in the Global Property Guide (September 2018), where we analyze the prices of an apartment with approximately 120m2 in the prime areas of the main European capitals .

In chart 1 , below, we can see the prices / m2 (Euros) for the purchase of an apartment, practiced in the main European capitals. In addition we calculated the GDP (Gross Domestic Product) per person at current prices of each country, expressed in Euros PPC. Purchasing Power Parity (PPP) is the equivalent of an exchange rate and is used to normalize the price comparison between countries with different living costs and is calculated from a basket of standard products and services. In this way we can obtain the wealth produced by each inhabitant, expurgated of the factor cost of life of each country.

In Graph 2 we can see the same data in Chart 1 only corrected by a factor that relates the GDP per capita of each capital to the Portuguese GDP, thus obtaining a price / m2 expurgated of differences in income / cost of living, of other countries vis-à-vis Portugal. 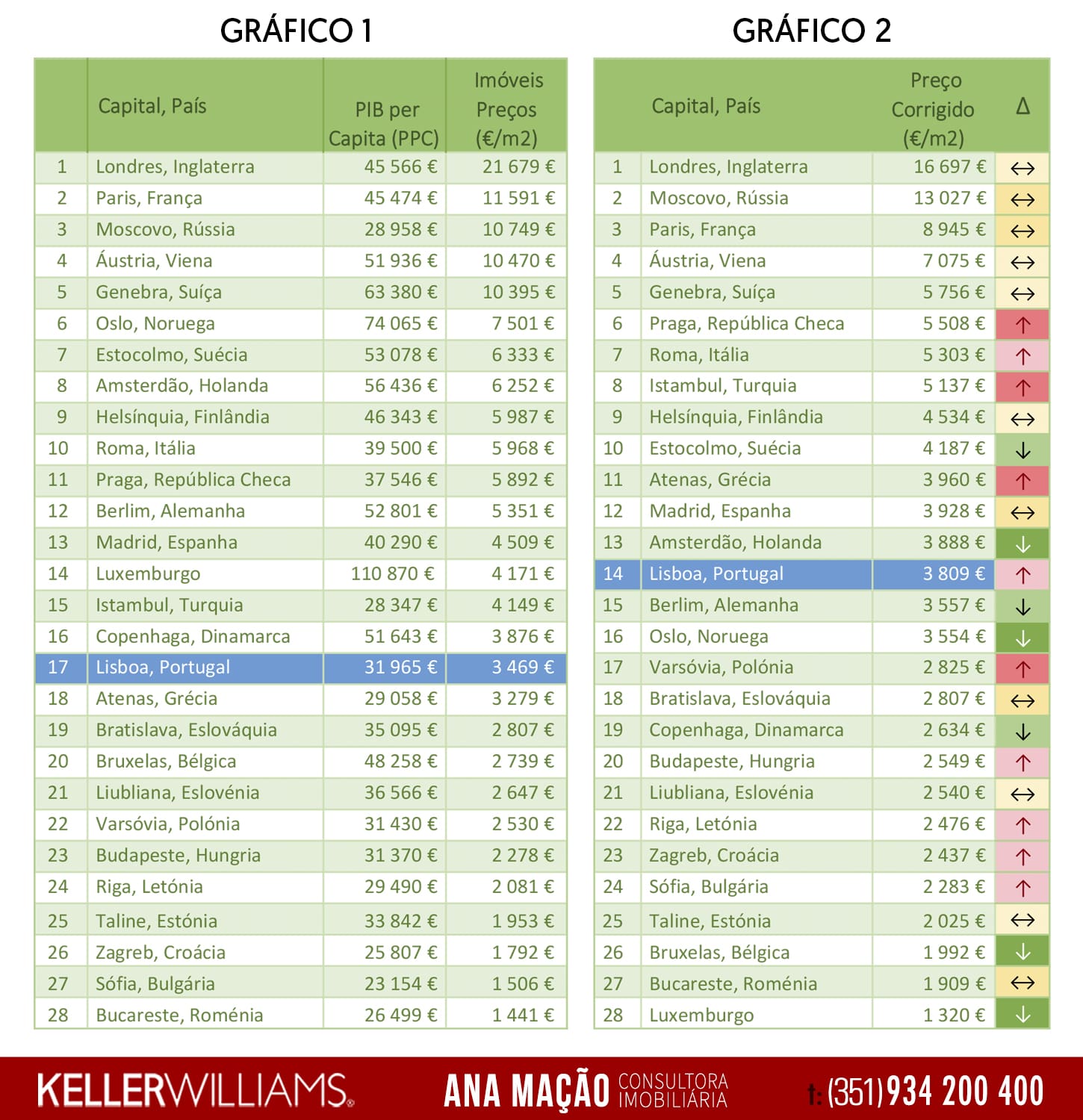 The Lisbon Metropolitan Area (AML) is the only region of Portugal that registered - in 2017 - a GDP per capita - wealth produced per inhabitant - higher than the average of the European Union (EU): 102% against 100%. Nationally, Portugal registers on average 77%, the fifth lowest value in the Euro Zone - just ahead of Estonia, Greece, Latvia and Lithuania.

When we look at Chart 1, it can be seen that the price / m2 practiced in Lisbon is still quite far from the prices observed in the most expensive European capitals (17th place), although it stands out in relation to Greece and other Eastern countries.

But when we look at Chart 2, where the differences in wealth and cost of living among the inhabitants of the various cities are blurred by the mathematical correction, prices in Lisbon rise and approach European capitals where it is more expensive to buy an apartment, the mentioned characteristics (14th position).

On the other hand, the perspective in figure 2 also shows that the imbalance is greater in the European capitals of countries with poorer or emerging economies, such as Portugal, Greece, Poland and other countries of the East. The yields and wealth produced there are smaller, and it becomes more difficult to keep up with the very high prices that are practiced in city centers. On the other hand, cities in richer countries such as Belgium, Luxembourg, Norway and Germany, although real estate prices are more expensive than Lisbon, are offset by higher incomes and higher GDP.

The current economic situation in Europe and the increase in demand in large urban areas are pushing prices upwards, because in the poorest countries there is still room to grow, compared to the price of the other more mature markets. However, it is noted that the growth rate is too high when compared to the pace of economic growth and the purchasing power that still characterizes Portugal and the countries of the tail of Europe.Thus, it is possible that there will be times of correction / stagnation in the prices practiced in the most inflated zones.

By 2018, prices in Lisbon's prime areas are still expected to grow in line with the recent past, as this year the demand from foreigners is even stronger than last year . Regarding the periphery of Lisbon, the expected price increase will be even more noticeable, since for localities like Amadora, Odivelas and Almada there is only greater demand pressure, partly because prices are more competitive with those in the city center and on the other hand because the construction of new fires seems to have awakened from the lethargy lived for nearly a decade.

To summarize, it is expected that the increase that is currently registered in the construction of new properties in the periphery of the large Portuguese cities will be decisive in the brake of prices and in the slowing down of the speculative dynamics of the market. However, as in other European cities, the historic center will tend to be occupied by tenants with greater purchasing power and activities linked to tourism.