Keller Williams is to be congratulated, continues to grow during COVID-19

"There is no good that always lasts, nor evil that never ends". The well-known Portuguese proverb applies like a glove to the storm COVID-19 that hit the housing market and the rest of the economy. But it is during the storm that the sea leaves the pearls on the beach! Keller Williams and KW Portugal (today celebrating its 6th Anniversary ), believe that these are times to bet even stronger, planning and investing even more in its growth and in the future of its more than 182,000 associates! 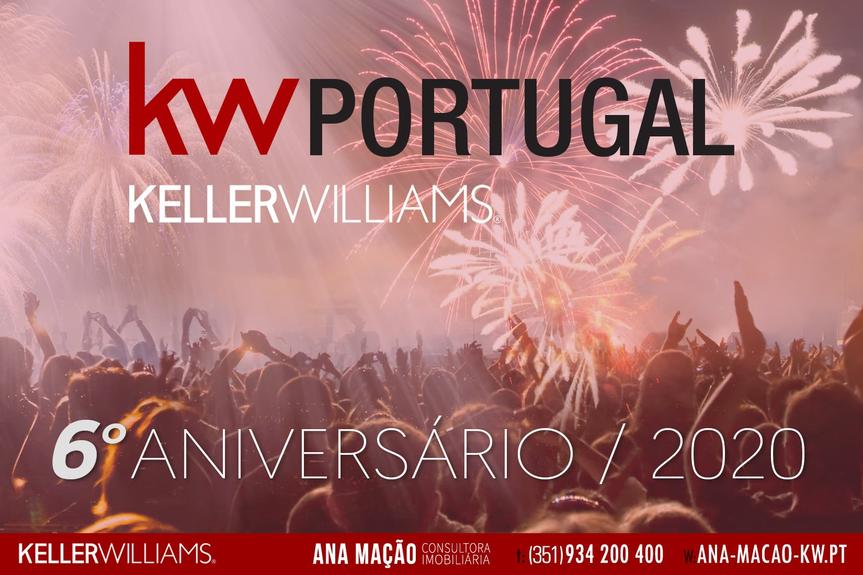 5 Continents, 51 countries, more than 1,060 Market Centers and 182,000 associates . This is the state of play (September 2021) of the growth that Keller Williams initiated in 2012, replicating around the world the successful trajectory started in 1983 by Garry Keller and Joe Williams, in Texas, United States of America.

Almost 40 years later, this is a solid, mature real estate brand with the same ambition that has always accompanied it. It has gone through economic crises, challenges on a global scale, but in its DNA the growth genes based on values, credibility and innovation stand out .

COVID-19 is just another episode in this already long history to which I am proud to belong . In 2008 Garry Keller wrote in his bestseller SHIFT:

CHANGES happen ... Markets change but you can change too. Sometimes it will change in response to a falling market, and other times it will change to take your business to the next level. Both can transform your business and your life. It is up to you to change your thinking, your focus, your actions and, ultimately, your results to be able to return to the game and stand out ahead of the competition. The actions that boost your business in difficult times, will boost you in good times, no matter the scale of the change suffered by the markets!

KW Portugal, another anniversary and 6 years of growth

In the month that Keller Williams Portugal celebrates its 6th anniversary, the company revealed that its sales volume grew 46% and 61% in July and August , these being the two best months of 2020, with regard to the growth of the sales amount. In addition, July was the month that registered the highest number of referrals during this year.

Currently with 1,858 associates and 27 Market Centers , KW Portugal achieved a 36% growth in the first half compared to the same period of 2019.

Continuing the growth seen in the previous 12 months, a period in which 12 more Market Centers were opened in Portugal alone, KW has not given up since the beginning of the pandemic:

The data from the first months of this year, show that our consultants are committed and sought in the months of confinement, alternatives to maintain their activity, namely with the use of technology. We are facing a new reality, in which it is essential to learn to do differently without ever losing sight of the customer.
The market has never stopped, nor will it ever stop, there will always be those who want to sell / buy and banks will continue to support families in buying their homes. However, the coming months may bring new challenges and it is important to remain focused and define operating strategies according to the evolution of the market.

KW started its journey in Portugal in September 2014 and aims to reach the goal of 50 Market Centers and 10,000 real estate consultants by the end of 2023, strengthening its share in the national market.

Continuing this premise, Keller Williams continues to expand its presence across the world, having recently added the Dominican Republic (Aruba) and Peru to its long list of 50 countries outside the United States.

On July 30, Keller Williams had 240 Market Centers and 10,915 consultants, outside the USA and Canada (34.1% more than in the previous year). William Soteroff, President of Keller Williams Worldwide (Keller Williams International Division) commented in a statement:

Keller Williams' continued rapid growth around the world is the fulfillment of a dream that started with Gary Keller more than 30 years ago. Our systems and models, training and technology are a powerful combination that continues to attract the best entrepreneurs in each country, to further build and incorporate the culture that distinguishes us ... Although no one foresaw the challenges of 2020, this year our international operations are thriving and growing more than ever . This is due to an unwavering commitment to our values and principles and to guaranteeing the best training in the sector for our real estate consultants . ”

Despite the COVID-19 winds that blow in the opposite direction with a tremendous impact on our lives, Keller Williams continues to look for growth opportunities around the world.

KW Portugal is to be congratulated , as it maintains the same charm, the same youth and the eternal ambition to grow present in its DNA, which from the start has set it apart from the competition!