Anything but pulling out doors ...

The title of this article of mine comes from the famous expression "v ale everything but pluck eyes ". This phrase, disseminated by different cultures and languages, originates from a "sports" modality called Pankration , which was once part of the Greek Olympic Games. This old mode of fighting had the only rule: " anything goes except to take out eyes or bite the opponent ". 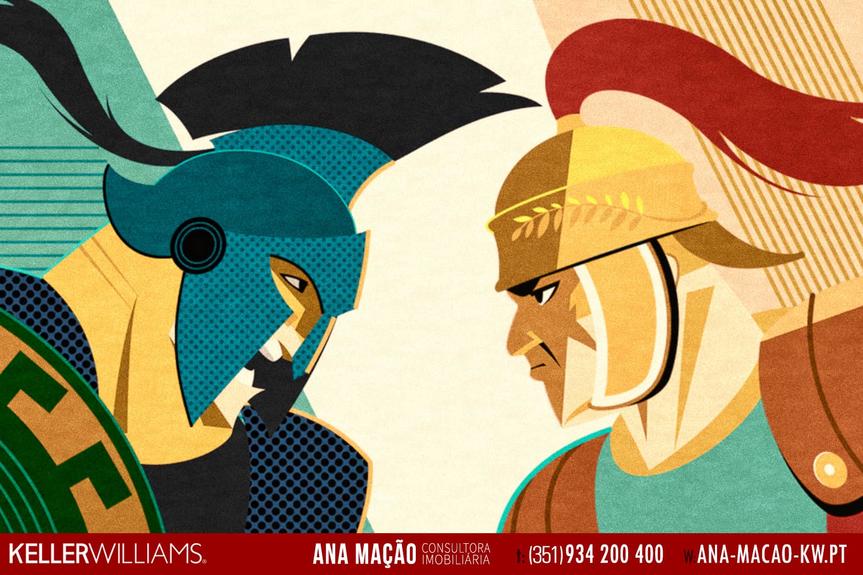 As a matter of fact, the Spartans even pulled out eyes :). This brutal struggle often ended with the death of one opponent, if not both, and it was the price to pay for the glory of entering the famous Olympic arena.

In Portugal and in recent years, the real estate sector has grown like never before, with regard to the number of professionals who have decided to pursue this branch of activity. The economic crisis, unemployment, the scarcity of good career opportunities, changes in employment associated with globalization and technological challenges have helped this decision.

According to the Association of Real Estate Professionals and Companies ( APEMIP ) and the latest data from INE, in the last two years sales will have grown by around 50%, the number of real estate companies has already exceeded 6000 and the number of workers is close to 50,000.

That is, in the last 4 years the number of professionals linked to the real estate sector will have practically doubled . Considering that there is a new wave of immigration of qualified workers, with special emphasis on Brazil, and who see this activity as an easier access door to access the job market - as it does not discriminate gender, age or qualifications - it is not surprising that this number may even grow.

If, on the one hand, in order to be able to exercise the activity of real estate mediation (individuals or companies), a license issued by IMPIC - Institute of Public Markets for Real Estate and Construction , is necessary, which conditions the respective attribution to commercial suitability and criminal record clean, the fact is that this license is mostly granted to companies - the thousands of workers who work in this activity usually do so on behalf of a licensed company, but are not subject to a special license or regulation to exercise it.

The same lack of individual regulation extends to the code of ethics.

On the one hand, there are associations of licensed mediators - whose registration is optional - that seek to impose ethical rules on their members, such as:

On the other hand, there is no individual license, professional aptitude certificate, professional card or code of ethics that conditions the exercise of the activity of thousands of real estate consultants who operate on behalf of licensed real estate mediation companies.

In other words, regardless of the "failures" or "dishonesty" that a consultant may incur in the exercise of this activity, access to the career will never be forbidden, as he can always change the mediation company. And as there are more than 6000 ...

Pluck eyes or bite the opponent?

This increase in workers, many of whom have no previous experience in this activity, has been done under the training, or lack of it, that each mediation company dedicates to new employees.

If at Keller Williams, the company for which I work, training is a pillar of the brand, and the initial intense training is followed by continuous training aimed at improving the skills and behaviors of the respective consultants, this is unfortunately not a constant in this market. .

This deregulated context promoted the creation of an "enabling and impunity environment" in which bad behavior can proliferate:

Considering the high amounts mediated by this activity - in 2017 the number of property transactions in Portugal rose 13.5% compared to 2016, reaching a total volume of 24.3 billion euros of properties traded (maximum value since 2008) - according to figures released by APEMIP , it is urgent to regulate, license and professionalize the activity of Real Estate Consultant.

Only through the implementation of a regulatory framework that involves the attribution of a professional license, revocable and that positively conditions the practices of this profession, will it be possible to introduce greater credibility in this market , thus constituting a guarantee of the exercise of the profession in an environment of transparency and suitability .