If you want to buy a house, solar orientation is one of the factors that should be considered for the sake of your comfort and the value of your investment. 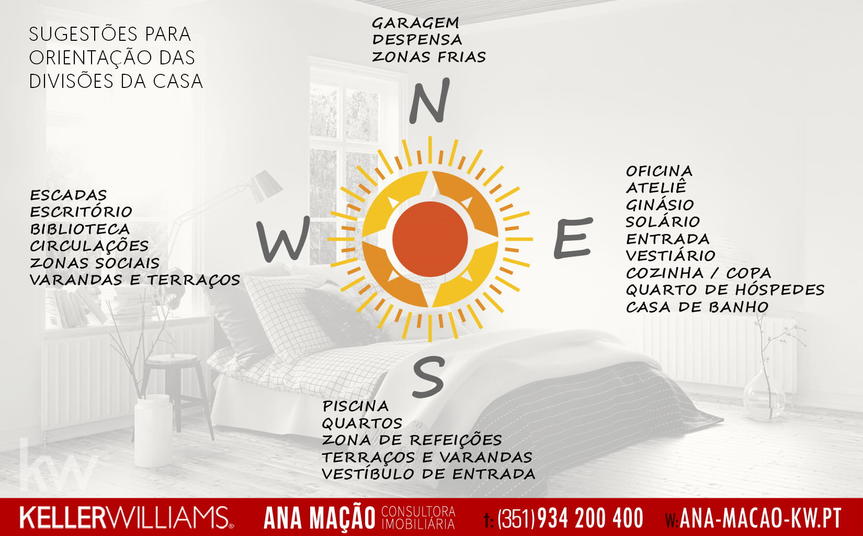 The ideal is that the most used rooms of the house are oriented in order to capture the maximum hours of sun exposure (in the regions of Portugal with cold to moderate weather), in order to improve energy efficiency and maximize natural lighting .

Climate and sun exposure in Portugal

Portugal is characterized by benefiting from a temperate climate and mild temperatures, being influenced by its maritime exposure to the Atlantic and Mediterranean, which contribute to hot summers and humid winters . But the climate and temperatures also vary depending on latitude, altitude and proximity to the sea:

It is therefore important to take into account the specificities of each region because, despite the fact that the Portuguese territory is not very large, as its shape and topography mean that between the North and the South, the coast and the interior, the degree of humidity at the thermal differences are large.

The influence of solar orientation in a home

The areas of the house facing each of the quadrants have specific particularities that are important to know, as the sun exposure conditions the comfort and the respective energy consumption:

Despite what has been said in relation to the specificities of each region of Portugal, here are some suggestions for a better orientation of the different rooms of a house:

Advantages and disadvantages associated with sun exposure in a home

This is aof the most important factors to consider when buying a house or preparing an architectural project, if you intend to build a new one.Some of the benefits associated with the correct sun exposure of a home are:

Improvement of energy consumption - Depending on the climate of the region where the house is located, it will be convenient to orient the rooms in order to protect those that are most used, from excess heat or cold. This way you will use less artificial heating / cooling methods, saving energy consumption and reducing gas or electricity bills in seasons with higher peak temperatures.

Energy Efficiency Certificate - This is a factor that reflects positively or negatively on the valuation of a home. Thus, a good efficiency index declared in the energy certificate (which takes into account the sun exposure of the property), can contribute to sell your home more easily and at a better price.

Comfort and health - Living in a house oriented to the north, especially in areas close to forest or mountains, will contribute to making the house more humid with the consequent problems that this can cause in terms of health in children and adults;

Valuation of a house - Those who buy a house do not always think that one day they may have to sell it, but if that happens, they may face increased difficulties, discouraging visitors who encounter a property with poor sun exposure, eventually having to lower the sale price to be able to close the deal.

What to do to lessen the effects of a bad sun exposure?

Sometimes it is not possible to do anything about the solar orientation of a house, either because the orientation of the land or the implantation polygon does not allow it, or because simply the house or apartment you bought was built by a third party.But here are some tips to alleviate the negative impact of poor solar orientation: