This September Keller Williams Portugal celebrated its 4th anniversary and it was good to remember and recognize, as such a short record of life, it can contain so many careers worth having, worthwhile business worthwhile and worthwhile lives to live ! 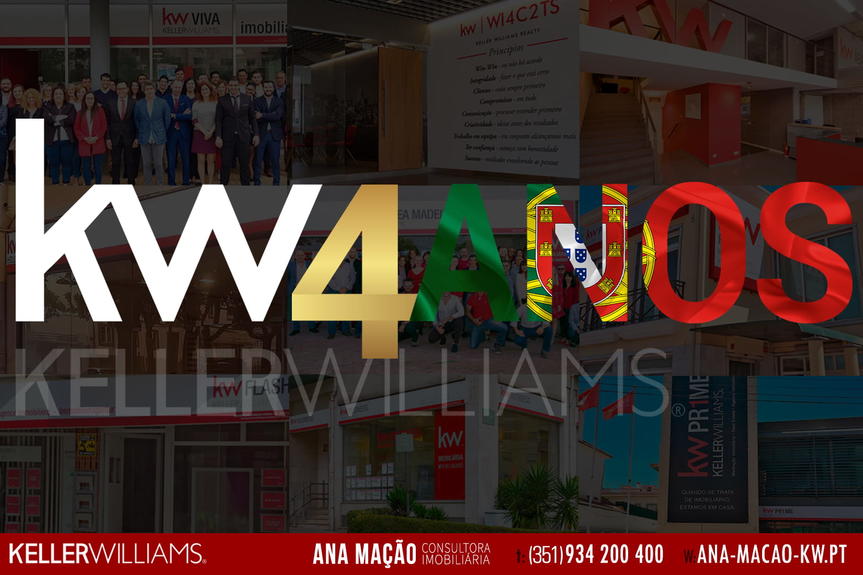 This is the motto of the corporate culture of the brand created by Gary Keller and Joe Williams in Austin, Texas, in 1983 and that still inspires more than 183,000 associates spread across 36 countries on 6 continents of the world.

KW-Keller Williams was the first company to make a difference to the rest of the industry by shifting the focus from the organization to the consultant by introducing a new business model: agent centric, where brand gains with commissions are limited to a ceiling, from which the Caper consultant earns almost the entire commission of the business. This and the other differences at the organization level (large Market Centers where support and training take center stage) have garnered successive awards and records that continue to fuel their growth now outside the US and Canada.

KW's growth in Portugal has affected the most densely populated urban areas, with emphasis on coastal regions. 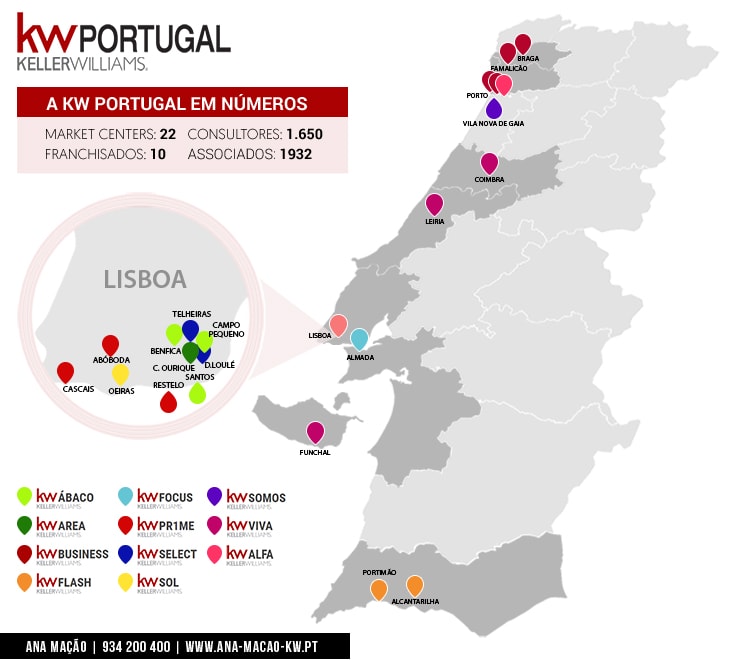 The current 1650 consultants are competing for the 2018 goal of reaching the 2500 associates, with the current number of 1932 associates.

To commemorate the anniversary of its 4th year of activity in Portugal, last week more than 700 members gathered in a working day at the Faculty of Dental Medicine of the University of Lisbon.

A number of speakers were invited, the main highlight being the launch of Gary Keller's latest book: SHIFT, with the presence of James Shaw (one of Keller Williams' most prominent entrepreneurs in the US) to talk about this new book that is condemned to be more a success like the last ones "The One Thing" and "The Millionaire Real Estate Agent". 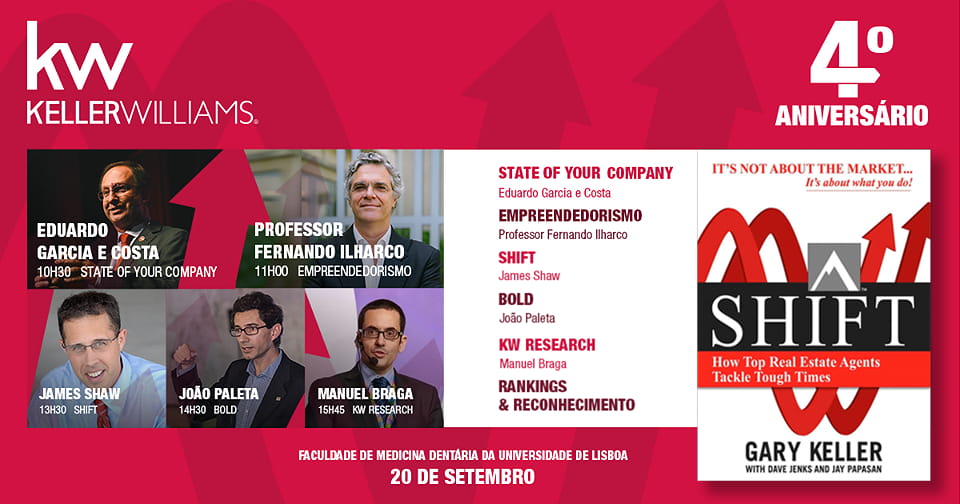 Nuno Ascensão revealed some numbers and graphs that exemplify the growth and success registered by KW Portugal during these 4 years: 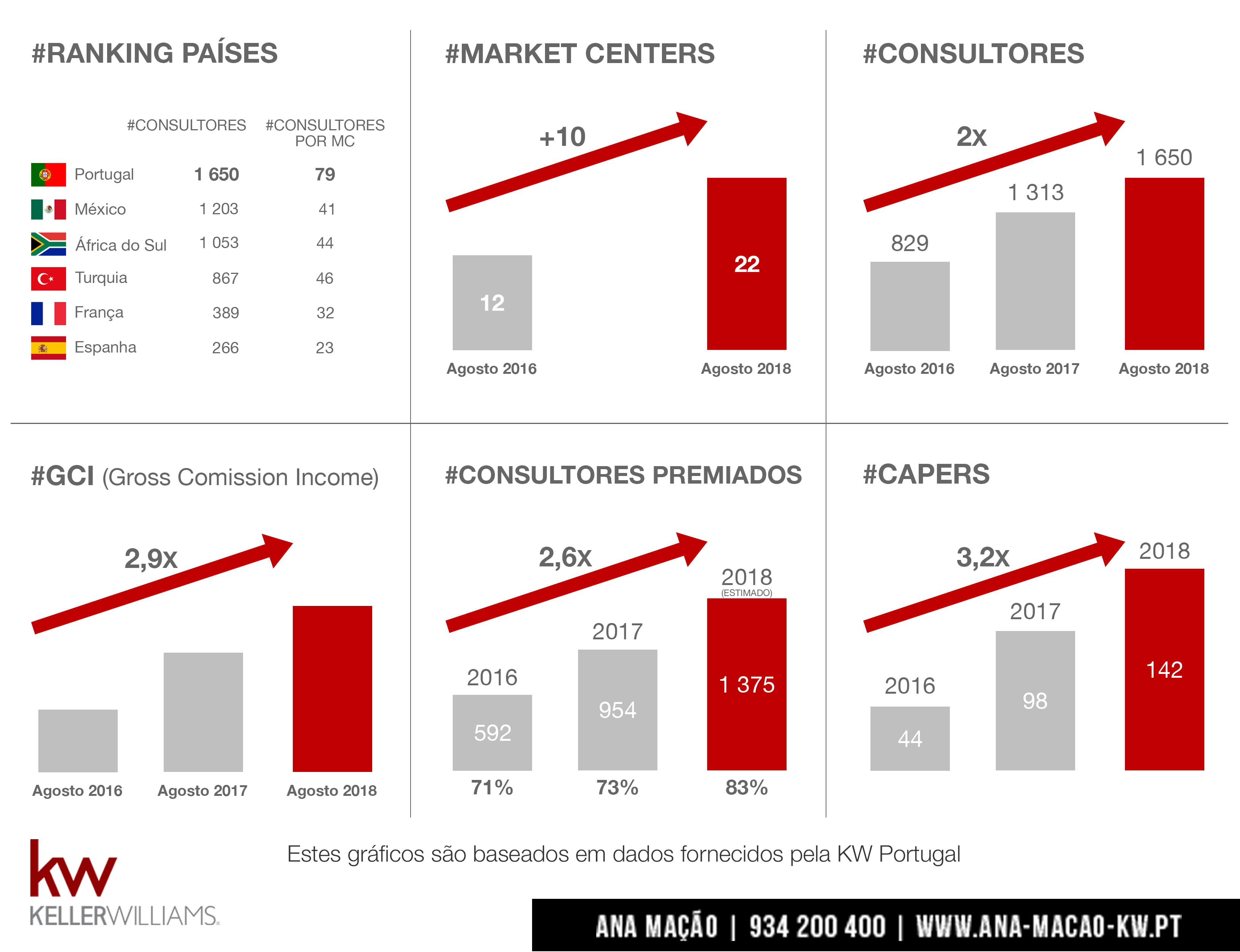 As is evident from the analysis of the graphs, the growth of Keller Williams in Portugal has been linear in all variables, but the highlight is the productivity per consultant that has been increasing, as a result of the application of KW models and systems, transmitted through continuous training to its consultants.

The turnover of Keller Williams Portugal grew 60% in the first half, compared with the same period of 2017, to 750 million euros. This represents growth above the market average, whose figures are around 20%.

After last year reached 1,200 million euros of real estate product transacted, the goal for this year is to reach 1,700 million Euros.

The Future of KW Portugal

Nuno Ascensão referred to the goal set for 2018 to exceed 2000 associates and to approach the 2500 , predicted for this year, reaching the 2nd position in the top of the largest real estate franchising companies and surpassing the ERA . And, believes that within 2 or 3 years the company will have about 50 Market Centers in Portugal.

He took advantage to announce that the next 22nd Market Center will appear in Lisbon, more properly in Telheiras , managed by KWSelect that already owns another MC in Lisbon, Av. Duque de Loulé.

During the last three years, KW Portugal was awarded the No. 1 region outside the North American continent and in the words of Nuno Ascensão (Regional Owner of Keller Williams Portugal) in 2018 "goes the same way" .

For next year we expect more and better results. I'll do my part :)

Apartment
For Sell
One Bedroom Apartment, Equipped and Furnished