Doing futurology based only on the most recent events is not part of my profile, preferring instead to focus my energy on the present moment, so that I can get the most out of it. But, looking at the indicators about the real estate market that are bombarded every other day, I cannot remain indifferent and I venture to say that " 2017 will be the Year "!

When looking at the statistical evolution of the various indicators that make up the real estate scenario, it is easy to see that, if there are no extraordinary events with a strong impact on the economy, this evolution will tend to follow a curve whose trend is predictable. At least, this is what mathematical theories teach us. 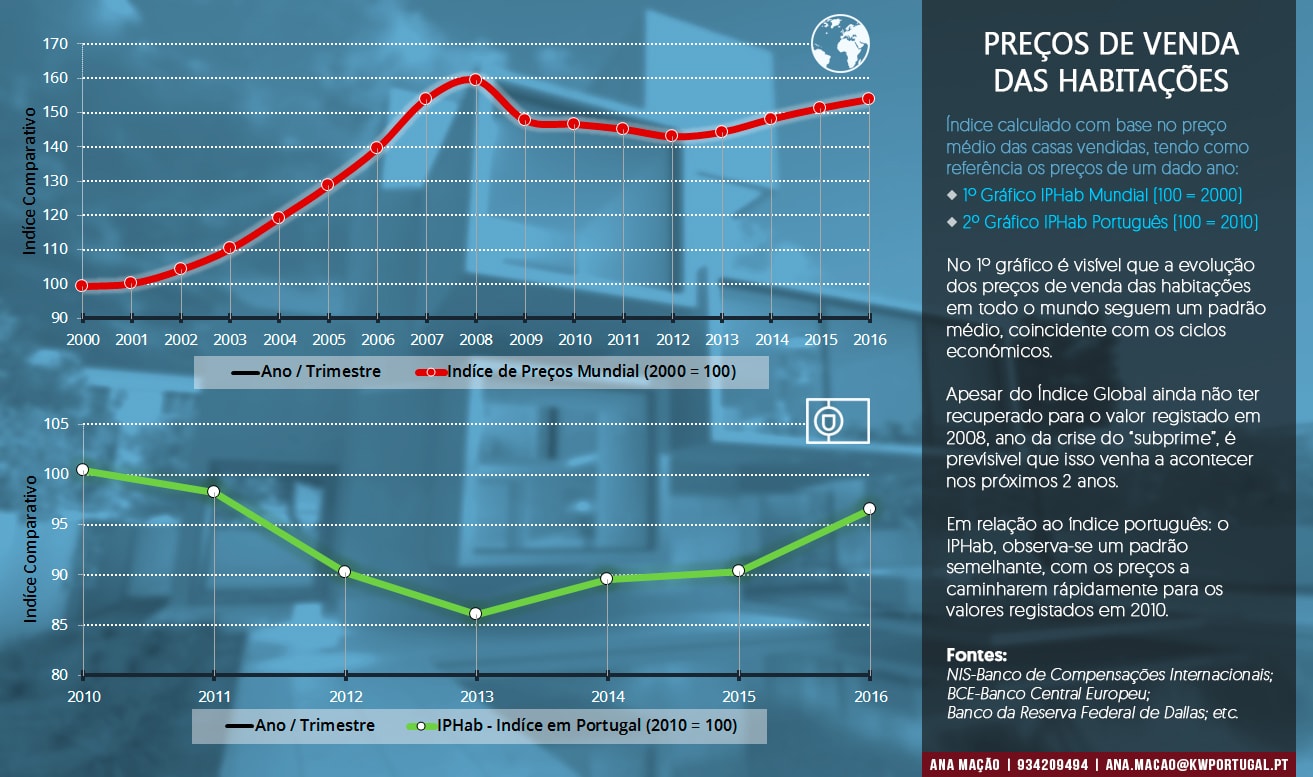 On the other hand, the price of housing in Portugal remains one of the lowest compared to its European counterparts. In the following graph we can see that despite the growth registered in the last 3 years, we continue to be one of the most competitive countries for international real estate investment. 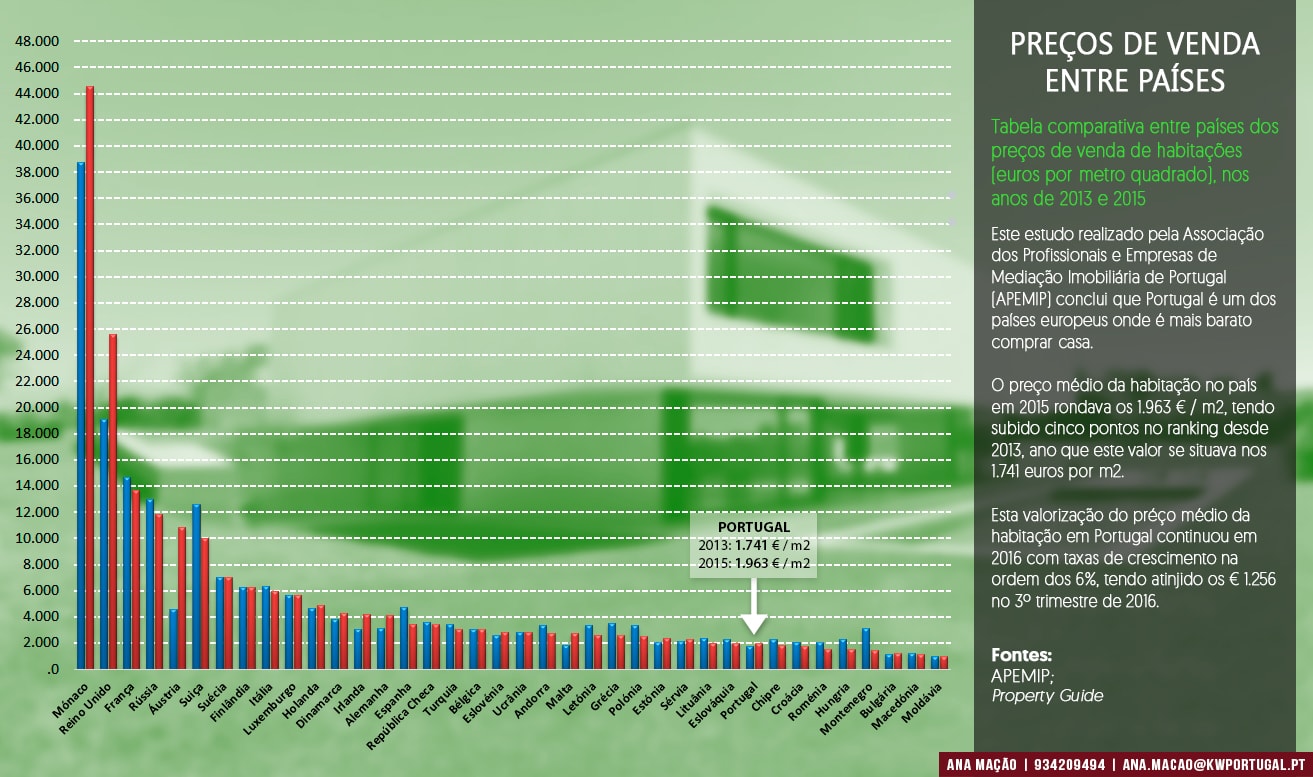 Interest rates for home loans are on a downward curve and have reached historically low values. This is due, in part, to values close to zero of Euribor rates and, on the other hand, to the drop in spread rates practiced by banks and an increase in the percentage of loans granted, compared to the total value of the purchase (reaching rates close to 85% ).

On the other hand, there are less restrictions on the granting of mortgage loans, especially by foreign banks, with Spanish banks standing out.

There are many reports from credible entities that predict the continued growth of commercial real estate investment in Europe, one of which is Cushman & Wakefield in the study published under the title “The Future of Real Estate Investment” .

According to C&W, for 2017, the growth of real estate investment in Europe will be in the order of 6%: “rents are expected to rise between 2% and 3%”, and this growth will be partially supported by Asian and Middle Eastern capitals. .

In an antagonistic way, one of the factors behind the reported optimism stems from the geopolitical risks that the world economy will face in 2017. In other words, real estate is considered a "safe haven" in a year when investment in public debt carries a greater risk. high. Events such as Brexit, the presidency of Donald Trump, elections in France, Germany and the Netherlands could have a strong impact on the financial markets and "push" investors into the real estate market. Urban rehabilitation is another of the trends identified for 2017, and in this context the city of Lisbon also emerges as an excellent alternative, offering a wide range of opportunities at competitive prices on a European scale

Portugal is expected to maintain investment volumes above 1,000 million euros, and it is even expected that figures in 2017 will be higher than those seen in 2016: € 1,300 million.

Throughout 2016, the French, Brazilians and Chinese were the ones who invested the most in our real estate market, especially in luxury homes, surrendered to the charms of our country, but also thanks to the tax and visa facilitation facilities.

This year, the main target cities for real estate investment will continue to be the traditional markets, such as Paris, Berlin, Frankfurt, London and Amsterdam, but Lisbon appears quite well positioned, both in the office sector and in retail.

Some of the reasons behind this dynamic are: the increase in prices in the rental market, the good performance of the occupational market, the growth of tourism, the successive awards that Portugal and its locations have won over the last few years, low prices per square meter when compared to other European countries, etc.

In addition to all the reasons already described, there is a clear orientation: Portugal is among the best world destinations for real estate investment. This is what the responses to the various surveys of various entities responsible for the management of real estate investment funds say.

♦ According to the Annual Global Retirement Index 2017 , from International Living (IL), Portugal appears in the 9th position in the Top 10 of the best countries for foreigners to live after retirement;

♦ Christie's International Real Estate released a ranking of the 10 cities in focus for the year 2017 and Lisbon and Porto are among those choices, with this real estate company being one of the most prestigious in the world, especially for those who invest in luxury real estate.

♦ At the end of 2016, Forbes magazine considered Portugal one of the best destinations to invest in luxury real estate, thanks to the low prices in our market and the good profitability of the rental market. According to the authors of the article called “ What $ 5 Million Could Buy You In Real Estate Around The World ”, the best properties are located in Portugal and Panama.

♦ Other leading newspapers and websites, such as the New York Times or TheMoveChannel, put Portugal in the spotlight of real estate investment .