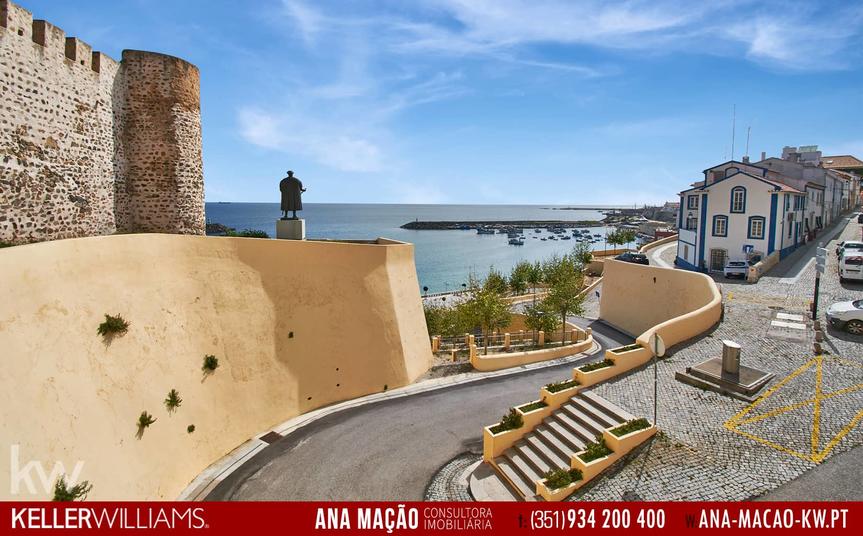 Sines is a city belonging to the district of Setúbal, and known as the capital of the Alentejo coast. In a municipality surrounded by beaches the importance of this city has to do with its historical past, with tourism, but also with its future potential, through one of the largest and best ports in Europe.

With 14,238 inhabitants, the city of Sines has a unique location, on top of a promontory whose view extends from the Port of Sines through the beach to the jetty where the fishing boats arrive. It is a quiet location, very sunny and without the stress typical of large cities. Below the port of Sines begins a coast that extends to the Algarve, punctuated by many beaches in an almost wild state.

Its history begins in 1362, with the elevation of Sines to a village by D. Pedro I, but its history is much older, going back to prehistory. Celts, Romans (hence the name "sinus" or bay), Visigoths, Moors and Englishmen passed through here. But this is also known for being the land where Vasco da Gama was born the navigator, in honor of which a statue was built next to Csatelo de Sines.

It is a rich municipality, with one of the highest GDP per capita in Portugal, largely because of the Port of Sines. Its economy is fundamentally based on trade and services, ports, polymers, electrical production, fishing and tourism. The industry and services are located to the north, on the beaches, among which are São Torpes and the tourist activity.

Fortunately, the project, designed in the 70s, to migrate the population of Sines to neighboring Vila Nova de Santo André and transform this area into an immense petrochemical and industrial complex, has failed. Today, Sines is a city that looks to the future in a more sustainable way, with the predictable closure of EDP's coal-fired power plant and the investments that are and will be made in the deep water port of Sines, in order to enhance the future expansion of the Panama Canal. Thus, it is expected that the construction of new rail and road routes with connection to Spain, will further enhance in the European context, the importance of what is already the most important port in Portugal.

Vasco da Gama - You can visit the statue next to the Castle of Sines, built in honor of the explorer who discovered the Maritime Way to India. Vaso da Gama was born in Sines and maintained a strong connection to the land until he died.

Castelo de Sines - Located at the top of the Sines promontory, it was built in the 15th century by King D. Pedro I, as a condition for the concession of the charter to Sines. It is believed that Vasco da Gama was born in this place, but it was certainly here that he spent his childhood. It's worth the visit. let alone the magnificent view over the bay of Sines and the sea.

Church of Nossa Senhora das Salas - Vasco da Gama have the current building built, in place of the previous chapel, in the 19th century. XVI, it is thought that as thanks for the success of the trip to India. It is worth the visit where you can see the high altar in gilded wood with the image of Nossa Senhora das Salas, the tile panel depicting the life of Mary and the altarpiece of Senhor do Vencimento.

Igreja Matriz de São Salvador - Located next to the previous Church and next to the Castle was where Vasco da Gama became a member of the Order of Santiago. Inside you will find: the main altar with a tabernacle of the Blessed Sacrament, the tiles of the chancel, the images of São João Baptista, Nossa Senhora da Graça, Santa Catarina and Senhor Jesus das Almas and the panel on the ceiling, painted by Emmerico Nunes.

Centro de Artes de Sines - Winner of the AICA / MC 2005 award and finalist of the 2007 Mies van der Rohe Prize, the Centro de Artes de Sines is a remarkable building of contemporary Portuguese architecture and the main cultural equipment and support for the arts and education in Sines. Its activity is divided into several spaces and areas.

Porto de Recreio de Sines - Walking or jogging along the sea, along the marginal that accompanies Vasco da Gama beach to the fishing pier, is a pleasure that attracts many Sines residents and visitors. It is also a place where you can enjoy local cuisine based on fresh fish and seafood.

Praia de São Torpes - Located in the parish named after it, it is one of the most frequented beaches on the Alentejo coast, thanks to its extensive sand, good conditions for surfing and the warm waters that reach temperatures of 30º, in some zones! The reason has to do with the heated waters of the EDP Power Station boiler that flow into the sea. It is a blue flag beach, clean and unpolluted.

Catering - There are plenty of good restaurants in Sines, a land where fresh fish is king. Adega de Sines, Cais da Estação, O Castelo restaurant and Taska do Fisgas are just some of the good examples.

Real Estate for Sale at Sines

Sines, on the Alentejo coast and just 1h40m from Lisbon ,   it is a pearl that attracts visitors from all over the world thanks to its history and fantastic location in front of the sea! Here you will find this building for sale , with AL license in the allocation phase, totally renovated with 3 floors and panoramic balcony, located next to the Castle in the heart of the historic center.

Building for Local Housing in the historic center