Despite the unpredictable climate that the pandemic brought to economic activity, if there is a sector that resisted and almost never stopped, it was the civil construction sector. Sector representatives risk an average growth forecast of 2.2% for 2021, and may even reach 3.2% in the most optimistic perspective.

This positive outlook is based on most of the forecasts released by the main national and international entities, which predict that Portugal should return to a growth trajectory from 2021, despite the context of uncertainty caused by the pandemic and the consequent impact on the national economy.

According to data from the central bank, in the week centered on February 4, 2021, the available data point to a year-on-year contraction of -4.5%, which contrasts positively with the -7.2% of the previous week.

Despite the globally positive forecast, in the construction segment dedicated to the housing market, a global drop of around -1% is expected. This appears in countercycle with the growth observed in 2020, when there was a high level of national and international demand, one of the causes being the macroeconomic environment marked by historically low interest rates.

According to the report:

This interruption in the growth trajectory initiated in 2014 is essentially due to a high level of uncertainty that may lead to the slowdown of investments already planned, as well as to the impact of the fall in the licensing of works by the City Councils .
In fact, until November 2020 there was a reduction of 1.3% in the number of licensed fires in new buildings, and in the rehabilitation works of residential buildings, the reduction is 8.1%, year on year.

I emphasize that, for me, the strong dynamics in the construction of new housing registered last year, was one of the factors that most contributed to mitigate the impact of the pandemic in the real estate mediation activity. Oeiras was the municipality in which this reality had the greatest impact on my total volume of transactions, during the year 2020.

According to the report:

On the basis of this expected decrease for the evolution of the production of new private non-residential spaces is the indicator related to the licensed areas by destination of the building, which, overall, decreased 4.7% until October 2020, which corresponds to a reduction in absolute terms of 106.3 thousand m2 compared to the same period of the previous year, with significant decreases in the licensed areas in buildings for industry, tourism, transport and general use .

AICCOPN and AECOPS base their optimism on the following causes:

The reinforcement of the weight of public investment in GDP (from 2.5% in 2020 to 2.9% in 2021, according to the European Commission forecasts), as a result of the expected execution of community funds registered in Portugal 2020 and the significant increase in amounts of public works contracts promoted and celebrated in 2020, justify an expectation of a favorable behavior of the civil engineering segment in 2021.

The associations also highlight the global value of the 11 thousand public works contracts signed during 2020 (registered in the Base Portal until December 31), whose global amount was around 3.1 billion euros , which corresponds to a + 10.1% increase in number and + 32.9% in value, compared to the totals calculated in 2019.

This announcement comes at a time when the National Statistics Institute (INE) released the figures for production in construction in 2020. In December there was a decrease of -2.5% compared to the same month of 2019, contributing for a global drop of -3.5% for the whole of 2020 .

I recall that in 2019, the Construction Production Index released by INE recorded a growth of + 2.7%.

The building construction segment was the most affected by a drop of -3.4% compared to the same month of 2019. The civil engineering segment saw the negative figures for November worsen in December, with a decrease of -1.1%.

In December, the employment index in this sector registered a year-on-year change of -0.1%, contributing to an overall drop of -0.5% in the whole of 2020 , which compares with an increase of -2.2% in 2019. These figures demonstrate that the construction sector, despite everything, is managing to resist better when compared to the other sectors of the national economy.

Resilience is the watchword for the construction sector

According to another study now revealed by Banco de Portugal (for the period 2006 ~ 2018), the construction sector has fixed operating costs (as a percentage of sales) lower than the global average of economic activity . These figures are especially important in the current situation of pandemic and economic crisis, as they indicate a greater capacity of companies in the sector to face an abrupt drop in sales. 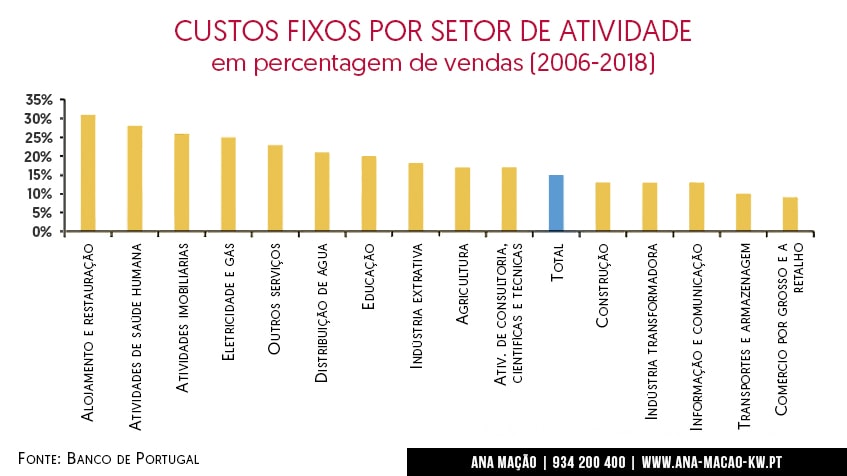 In summary, the reading of the main associations in the sector is moderately optimistic, however leaving an open door for possible positive surprises. 2021 will be a year in which resilience will be the watchword, in which resisting is the first step in order to grow!