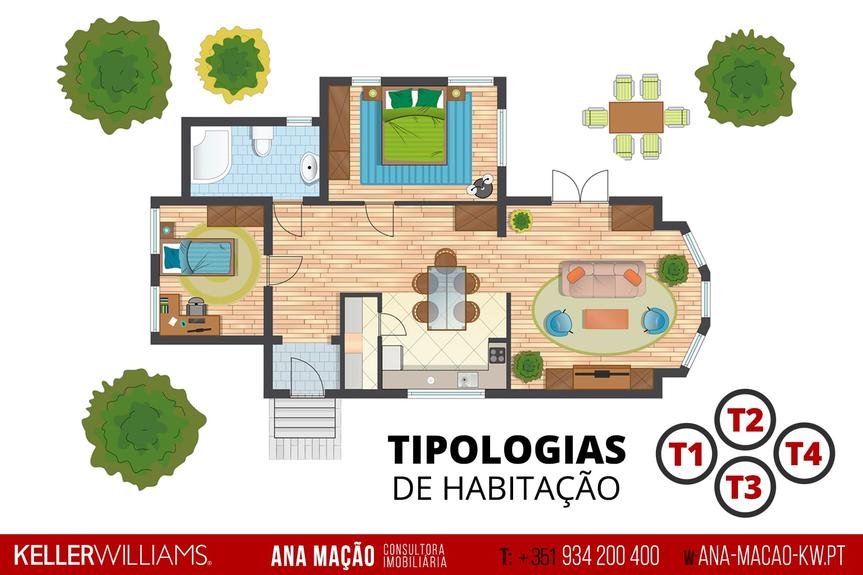 From the point of view of the characterization of a property, it is customary to use the typology based on the designation T (n) , in which "n" is the number of bedrooms. E.g. T3 is the term used to designate a house with 3 bedrooms and a living room. In other words, the remaining divisions: living rooms, kitchens, bathrooms, storage spaces, do not count for the purposes of this designation. As an alternative to Tn, the number of divisions is also used to describe the typology of an house (eg in Land Registry Certificate), in which case the bedrooms already count. Thus, for example, a T3 has four divisions: 3 bedrooms and a living room.

In the case of an apartment, the types can be: T1 (1 bedroom), T2 (2 bedrooms), T3 ( 3 bedrooms), T4 (4 bedrooms), T5 (5 bedrooms), etc.T0 is also called "studio", a term used to refer to a house that does not have any separate bedroom, that is, it only has a division (which works for both functions: bedroom and living room), plus a kitchen and toilet.

It is also common to find the designation T2 + 1 , the " +1" being used to indicate one more room (which can be an annex, eg a sunroom), the basement, or an attic that has been converted into a room.

On the other hand, although less frequently, we can find the corresponding designation V1 , V2 , V3 , V4 , etc. which means the same as T1, T2, T3, T4 , etc., but this terminology is associated with the disused designation of Villa (currently replaced by House). This designation is still used, but only by professionals in engineering and projects than by professionals linked to the real estate industry, who use the terminology T(n) whether it is apartments or houses (villas).

What does the legislation on housing typology say

Everything indicates that the designation T(n) originates from the General Regulation of Urban Buildings Decree-Law No. 38382, of 7 August 1951, which meanwhile underwent a revision through Decree-Law No. 650/75 of 1975 . Here we can find the following reference:

Further on (Art. 66-1) we find a table that helps to understand the restrictions imposed on housing compartments, which cannot be less in number and area than those indicated in the following table:

Other types / designations of housing

In addition to the reference to the number of rooms there are other terminologies used to classify a property and thus describe the type of housing, such as:

We are usually talking about a house (not divided in the land register) in which the different floors have independent entrances , allowing them to be inhabited by more than one family, one per floor. Usually we are talking about a house with two floors, in which one of the houses is located on the ground floor and the other on the 1st floor, with independent access made through an external staircase to the property;

It is the term applied to houses that only have one habitable floor. This type of architecture that was once the most used, especially in humble houses, today happens exactly the opposite, since the increase in the price of soils has led to the height increase of houses, and it is usual to find houses of 2, 3 and 4 floors, in addition to the basement / garage;

This designation is used to describe a house that is divided into two floors, with the connection between them using an interior staircase. It is mainly used for apartments, since the houses already have this characteristic;

As the name implies, in this case the property is divided into 3 floors ;

They are designations used to describe a house whose implantation polygon has an area of land all around it, that is, the building does not have any walls glued to other neighboring properties.

This designation applies to a house built side by side with 2 other houses , both of which share the two side gables;

Designation used to describe a house that was built side by side with another house . They share a lateral gable;

The term “loft” is a term of Anglo-Saxon origin and designates a type of housing disseminated from the 1950s onwards, which combines a style of design and life (“Loft Living”), with decoration and concept very own housing. It was born in urban areas with a typically industrial matrix, and the property is characterized by a double height ceiling and decorative references of industrial style .They are usually adapted from barns, warehouses or other large structures, with few divisions and are characterized by:

This type of housing began to be used more by artists and professionals, but today its concept has been integrated into the rest of the urban fabric and is used successfully in luxury homes in many cities around the world.